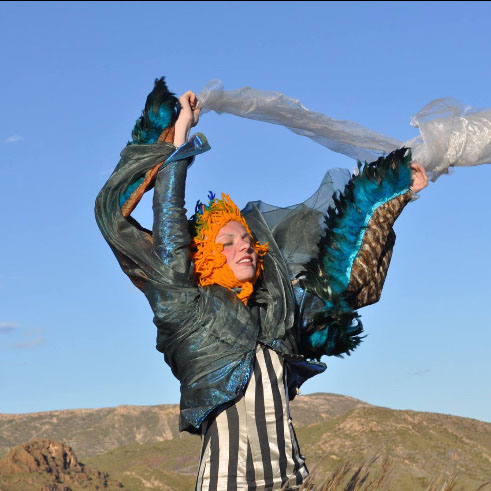 I’m an independent Butoh and contemporary dancer, teacher, choreographer, and performer living in Germany.I was born in 1981 in Soviet Estonia, but my family’s roots come from the Finnish tribe Inkeri, so, after the end of the Soviet Union, my family moved back to Finland.

When I was a little girl I used to dance in front of the shiny cupboard door. I could see my reflection. I felt like I was flying. I was used to going, with my best friend and my dear little sister, to the construction sites in the Soviet Union Kohtla-Järve, and there creating performances for dogs and cats.

When I was 10 years old my fascination with movement led me to train in dance: Jazz, street dance, ballet, and show dance. I studied at the Roehampton University of London, the Northern School of Contemporary Dance, and the Theatre Academy of Helsinki. I started to explore other forms of art in movement, like clownerie, with Slava Polunin; Brazilian Orisha dance, with Nina Dipla; street theatre, with the community antagon theaterAKTion, and I got captured by Butoh.

Butoh, with its early name Ankoku Butō (暗黒舞踏, "Dance of Darkness"), is a dance theater without a fixed form. It originated in Japan after the Second World War, as a reaction to the horror of war and an act of resistance towards the modern society’s forms and values, coming from the United States. Its aim is not to reach some canonic ideals or to represent forms, but to connect to our life source, through a deep acceptance and listening of the body. If you want to know more about Butoh, check my master Atsushi Takenouchi’s website.